PATTERN GRADING FOR FASHION DESIGN: How to learn to grade sewing patterns Part 2

The previous post defined what grading is and why you may need to grade. Today's post highlights different pattern grading method
WAYS TO GRADE 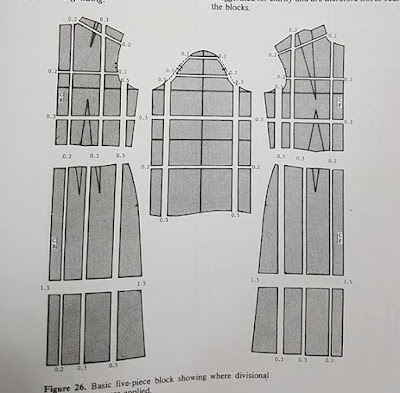 Different sources may categorize it in different ways but it all boils down to the same thing. Below is my classification:
A.    Manual grading
B.    Machine grading
C.    Computer grading

A. MANUAL GRADING
This is the basis for all forms of grading. This I can further sub-head as-
i)    Cut and spread method
ii)    Pattern sliding method
iii)   Coordinate point shifting

Cut & spread: I think this is the very foundation. It shows you where and how much you are increasing the pattern. Grading is not just adding to the side seams but little increases in different locations.
To grade up, you cut and spread; and to grade down, cut, and overlap. While this method is good for envisioning what happens when grading, it is not how grading is done by “pros". No one has the time to be cutting, pasting and reassembling cut pieces. It is a good method for those who grade occasionally.

Pattern Sliding: This method, from my research (online, of course) is the preferred manual pattern grading method used by “pros” who have been grading a long time way before the preponderance of computer grading. I am talking 30 years’ experience and over pros.
This is how the M.Rhor book, which was written in the 1940s, shows how to grade. It requires the use of a hinged ruler. This method is the one I see in pattern making and grading texts published in the USA, using the imperial measurement system. Let me point out at this juncture that this method is not my preferred method. One of the reasons being that the base pattern (that is the pattern to be graded up or down) is moved around.

Coordinate Points shifting: This is my preferred method and it is also known as the X & Y method. The truth is that all the previous methods are shifting points along the X and Y axes too. The pattern sliding method and this method are more or less the same thing, only that the thought process differs. Anyone who is conversant with the sliding method can easily wrap his head around this.
I like that with this method, the base pattern is stationary. You will only need to measure out specific distances on the x and y-axes from the defining points of a base pattern to create new defining points. These “defining points” are known in pattern grading terms as “Grade points”.
This is the method I see most in grading textbooks published in Europe and in the metric system. Examples are the Winifred Aldrich series of pattern making texts which typically dedicate a small section to grading.
To be honest, I could not wrap my head around it (Aldrich) for a long time, it seemed like Greek. My light bulb moment came when I started computer drafting and grading. More on that later.

B. MACHINE GRADING
This is the use of a machine called a “Grade-O-Meter”. Grading with this machine is based on the pattern sliding method. Instead of using a hinged ruler, the base pattern is mounted and fixed to the machine, and the dials on it are used to move “in” or “out”; “down” or “up” in specific distances. Using the machine should be more accurate than using a hinged ruler as the pattern is clamped down. The video below demonstrates how the machine is used.

C. COMPUTER GRADING
The logic behind computer grading is the same as manual grading. The X and Y method is often how grading is done in most computer grading systems. With computers, grading is more accurate and can be done way faster. Grading was one of the first pattern development processes to be computerized being the most mathematical end of pattern development.
Below is an example of how grading is done in Adobe Illustrator ( AI ). AI is not a dedicated pattern making system but can still be used to draft and grade patterns to a great degree of success. My light bulb moment came only after watching how the X & Y is done on AI. Only after that was I able to make a better sense of M.Rhor and Aldrich pattern grading. I was able to go beyond grading the basic blocks to grading more styled patterns.

In the next post, I will be sharing more links and resources that will help to make better sense of grading.