PATTERN GRADING FOR FASHION DESIGN: How to learn to grade sewing patterns Part 1 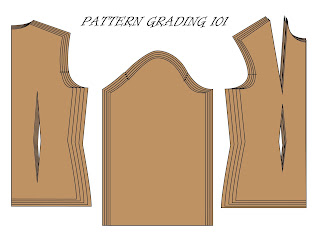 What is Pattern Grading?
Pattern grading is the process or the technique of making a sewing pattern available in other additional sizes without redrafting each size from scratch; Grading is the method by which the pattern grader creates patterns for a whole range of sizes from the agreed base size. It is the task of grading to proportion those increments among the different parts or panels of the garment according to detailed, logical rules

Why pattern grading?
Usually, it is much faster to grade into another size than starting a completely new draft. While the main purpose of grading is to make a particular pattern available in a range of sizes, grading can also be used as a means of pattern development. For instance, in developing a jacket block from a basic bodice block, most pattern making books will have you widen the neck a bit, deepen the armhole, broaden the shoulders; then add some ease through the bust, waist, and hip. All these steps are more or less the same things you do when you grade up. So once you have a fitting bodice/torso block with a sleeve block to match, you can grade up 1 size and then make the graded-up version your new jacket block. Am I making sense? It is like saying the size 10 bodice block can work as a size 8 jacket block.

Grading is not Pattern Alteration
I see this being implied a lot on sewing blogs and videos online a lot of times. They say grading is a process of taking a pattern (which has not being designed to your measurements) and making it fit you. Nay! I beg to disagree even though you may need to grade a pattern in the process of making an alteration. When you see or hear terms such as “full/small bust adjustments”. FBA or SBA, those are alteration terms/processes.
Likewise, Pattern Scaling is not the same thing as pattern grading.  For example, you may use pattern scaling techniques to take a pattern drafted in a quarter or half scale and enlarge it into life-size.

Is grading difficult?
Yes and No. It is quite technical and requires a good head for arithmetic, coordinates, and geometry. If you already know how to technically draft patterns then you, you are on your way already. One of the things that probably makes it look difficult is the dearth of textbooks, classes (both online& offline) for the topic when compared to pattern making and sewing techniques books and tutorials out there. The process is like some kind of guarded “industry secret”. I can tell you that “grading”, once you get the hang of it, is easier than re-drafting.

How I first learned about Grading
My first introduction to grading is from the patternmaking book by M.Rhor, which I wrote about and can download for free here. I learned the basics from the book, and I have supplemented it with info from different sources- textbooks, the internet, and calculated guesses. I have gone on since then to grade several styles- trousers, raglan, bodysuits, bikinis, cowls, asymmetric cuts, panelled cuts, etc.
Some patternmaking textbooks have a small section dedicated to grading where you may be able to pick up one or two things. I bought my first dedicated pattern grading book in 2017, and guess what, I did not learn much that I had not figured out before. I bought it as a reference book for a class I was to teach. The book only proved to me that I was on track because I have never opened or referenced the book since then. I will be keeping the book, I think it is good.  I will be sharing my review of the book and other grading books/resources in subsequent posts.

Can you teach yourself grading?
Yes, if you are good at self-directed learning but I think a physical class with its structure is always better. However, there are not so many learning options out there even online.
The next post will be about methods of grading with links to online resources. So stay tuned if pattern grading interests you.

Have you ever attempted pattern grading? how did you learn and how did you find it? Is it even worth the trouble? you can let me know your thoughts in the comment section.