image source: makerist.com The hobby/home sewists now play with the coolest of toys to make sewing easier. Sewing patterns are traditionally made on paper to be used by sewist but today PDF sewing patterns that can be downloaded and printed at home have become really popular. The downside is the time it takes to print, trim. tape/gum and the numerous pages together. Today a growing number of sewist use projectors to project their PDF sewing patterns from their device (computer/phone) onto fabrics without having to print and tape sheets of paper. This saves the sewist time and is also more eco-friendly by reducing the amount of paper used. There is a Facebook group dedicated to all things projector cutting, from choosing the right type of projector to setting it up. There are also some Youtube videos to help.
Post a Comment
Read more

Why my Website Went on Hiatus and Why it is Back 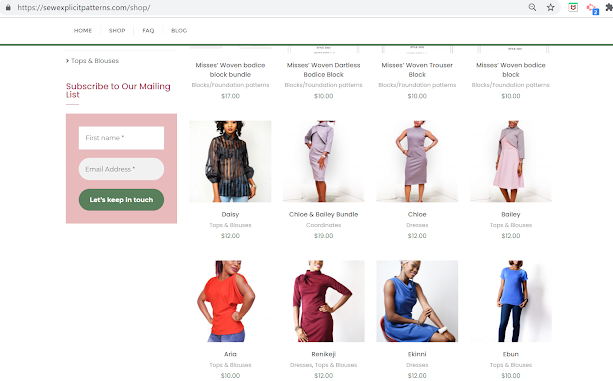 Over the past 4 weeks, I have been working on bringing back the SewExplicit website . I pulled it down in 2018 or 2019 for reasons I mentioned in a post in February.  Since then, I have been selling through Etsy and Makerist and I linked the domain name to this blog. Now, this blog sits on a sub-domain (blog.sewexplicitpatterns.com). The downside to all of these is that my blog site SEO has been seriously messed with has I have lost most of the visits I get from search engines due to the domain name swaps. Hopefully, it picks up again soon. If you are here for the blog posts, kindly use the search function to look for the topic that brought you here
6 comments
Read more 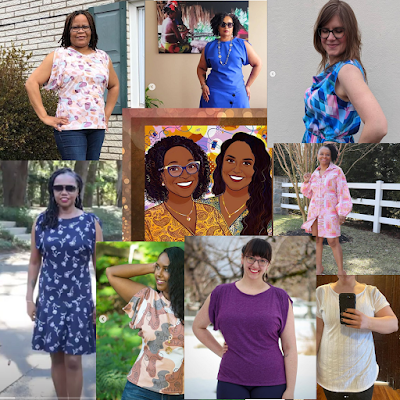 At the beginning of last month (February), I talked about #BHMDesignerChallenge on Instagram and how I hoped to see entries use my sewing patterns. The challenge has come and gone and here are the lovely makes of SewExplicit Patterns from sewists of Instagram. There are also a couple reviews I am going to. The first is from Kiera of @islansewcialist , I had shared this before here . Her make of the Aria sewing pattern spurred many to use this same pattern for their entries as you will in this blog post.
Post a Comment
Read more 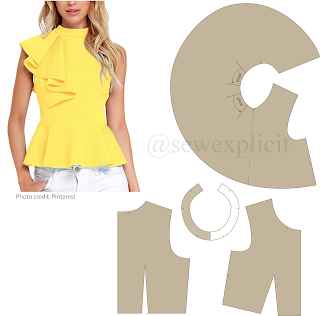 I have been seeing this style of peplum top for a while and even tried it out for the first in 2015 using woven Fabric. I also made similar styles using different weights of Neoprene fabrics. I have copied pictures from google to Pinterest to show the variations of the style. My tutorial below is not precisely based on any of the copied pictures, however, the same concept can be applied.
4 comments
Read more 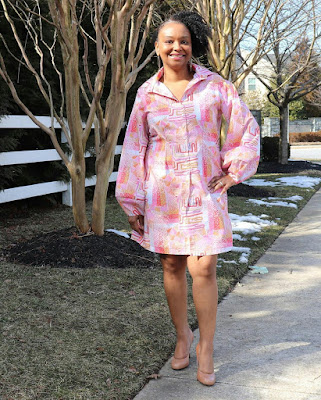 Still on and about the Black History Month Pattern Designers Challenge  and today's post is another review of one of my sewing patterns, the Daisy lantern sleeve shirt pattern by Crystal . I had shared her Instagram post of her make of the daisy shirt in the last post and here is her detailed review she made on her Youtube channel . I am happy to hear that she enjoyed using the pattern. This review and the last review I posted are their independent reviews and their candid opinions.
Post a Comment
Read more

In September of 2016, I released my first 3 sewing patterns and by August of 2017, I had published  4 more. In between, I had also released 2 sloper/block patterns. Then nothing, no new pattern till now (February of 2021).  What happened you may be wondering? Well, I started working on a clothing line in the latter part of 2017 and released a ready-to-wear clothing collection named under the brand name "Simplitude" in about May of 2018. You can view pictures of this collection on the Simplitude Instagram and Facebook accounts. This took a lot of my time, energy, and efforts so I couldn't work on releasing new sewing patterns. Also, I was not selling enough sewing patterns to make a decent income. My marketing skills, especially social media skills were not (and still not) all that.
6 comments
Read more

The month of February is Black History Month and this year   @sewnaturaldane   is hosting a   #BHMpatternDesigners  Instagram  challenge alongside   @islandsewcialist . The  #BHMPatternDesigners  competition was established in 2019 by Nateida of  @sewnaturaldane  to give visibility and representation to black pattern designers, fabric companies, and knitting designers. Check out her website  for details on how to enter, the rules, prizes to be won, and more.
Post a Comment
Read more
More posts